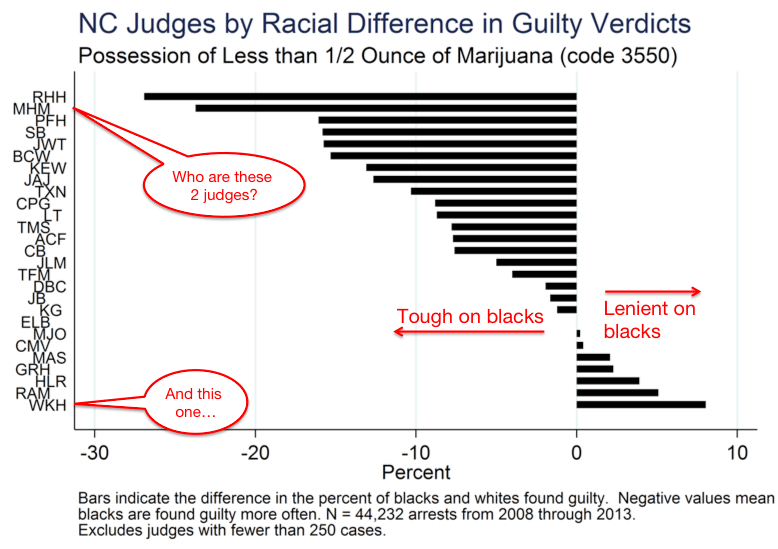 Over the last week I’ve been busy analyzing NC AOC judicial court data in preparation for our NCDatapalooza finale contest.  We didn’t win, but we have a ton of data that we can share with you.  The data we analyzed was for simple possession of marijuana arrests that occurred in North Carolina over the period 2008-2013.  The reason we chose this dataset is that it seems, at least anecdotally, that a lot of people—especially blacks and other minorities—are incarcerated for minor things like marijuana possession, something silly that would never happen in Colorado, California, or Washington.

Some folks believe that simple marijuana possession is used as an excuse to incarcerate blacks.  So a question that some statisticians and policy wonks have been asking is:

Can we statistically measure the conviction rate among judges in North Carolina for specific races?

In other words, can we see, based on a bunch of historical data, who the judges are that have been biased toward convicting blacks more often than whites?

The short answer is yes, we can and yes thats the kind of shit we are going to try to open up and publish as often as possible, even as we get pushback from the legal community.  In fact, that’s the whole intent of our open data effort.  I mean, seriously, we have a pile of stats on football players, but practically none on judges, cops, and lawyers.

Yes, Judges Are Biased, and We’ve Got Data to Prove It

According to the 44,000+ records that we have on marijuana arrests, the toughest judge on blacks was black himself.  His name was Roland Hayes and he died a couple of years ago.  The second toughest judge on blacks is a female judge in Durham, NC.  She’s still an active judge and her name is Marcia Morey.  The most lenient judge on blacks?  Also a black judge, William “Pete” Hunter.  He retired last year.  Are these results expected or unexpected?  No matter how you feel about this, it is interesting information for sure.  Note that this is strictly for offense code 3550 – simple possession of < 1/2 ounce of marijuana, and for the period of time between 2008-2013.

We can do this for any offense code in the NC judicial system.  There are almost 2,000 offense codes.  Over the next few months we plan on analyzing additional offense codes while concurrently opening up our platform for access by anyone and everyone.

Check out our NCDatapalooza slide stack below: