What Happens When You Get an OWI in Michigan? 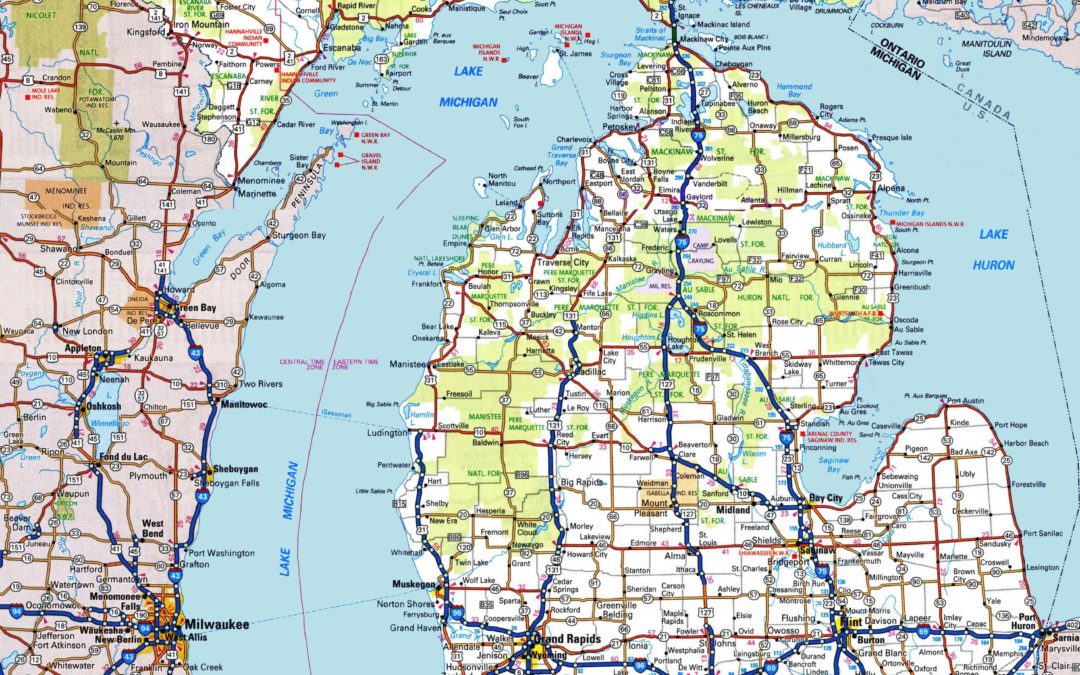 Of all the places in these United States to establish yourself as an effective commander behind the wheel of the car, it should, from a respectfully historical position, be Michigan. After all, it’s where Henry Ford was born and raised, and where he later founded the Ford Motor Company and developed the prolific Model T at the turn of the century, a car widely regarded as the first affordable American vehicle. It wasn’t until many years later that we learned cars could be used for some pretty dangerous shenanigans, and thus as the last couple of states joined our near-perfect union, the very first laws governing traffic safety starting falling into place. You don’t have to be the ultimate patriot to know that it’s brave to look out for your fellow American drivers. From the shores of California to tranquil expanses of the Great Lakes, it’s easy to find oneself in unexpected situations. We’re human — we make mistakes! But whether you consider yourself a Michigander or a Michiganian, as both are in fact considered acceptable terms for one hailing from this northern region, one thing is for certain: It isn’t wise to drink and drive. And if you do happen to err on the side of bad judgment and find yourself in such an intoxicating situation, it’s beneficial to know ahead of time what to expect and how exactly your rights are defined.

What the hell is an OWI?

It’s basically a fancy way of referring to the ethical standards many other states have put into place when it comes to intoxicated driving. In Michigan, it is illegal to operate a vehicle if you are

The term “DUI” does exist in Michigan, however OWI is much more of an all-encompassing term, and is used to describe the majority of incidents involving drivers under the influence of drugs or alcohol.

As is true in many other places, there are three main categories of alcohol levels in one’s blood that will put you over that “illegal” threshold. In the state of Michigan, you are breaking the law if you are:

Depending on the exact conditions surrounding your arrest—and on the competency of the legal representation you choose to employ—the penalties you could face do vary, and may include jail time, fines, license suspension, and the installation of extra devices on your vehicle to prevent you from becoming a repeat offender. And as if those immediate ticks against you aren’t enough to deal with, you’ll need to consider those long-term effects on your well-being also, like the rate increases you will more than likely see in your car insurance. Keep in mind that an insurance company generally will not raise your rates based solely on an OWI charge—only when you are convicted will you start paying out the ass, or find yourself dropped from your insurance plan completely. All the more reason to get a good lawyer!

So you drove drunk and think there’s a pretty good chance you could be convicted if you let this thing run its course. It’s important you’re aware of the precise fines and penalties you may face, depending on your situation.

Before we get into things, it’s worth knowing that in Michigan, not all drunk drivers are created equal. In other words, there is a threshold which distinguishes the “Super Drunk”—or, a BAC of .17% or higher—from just the regular drunk folks. Being accused of Super Drunkenness is associated with a host of more extreme penalties because, as one might expect, your capacity to injure someone else and cause some real damage increases exponentially if you are in fact that drunk. However, a driver’s first and second offenses, no matter how drunk he or she is, are considered misdemeanor crimes in the state of Michigan. Knowing all this, you may refer to the following list to see how your unfortunate turn of events generally ranks in the grand scheme of things:

First things first. If your BAC was below .17, your license can be suspended for up to 6 months and you can have up to 6 points added to your license. Extra penalties may include a fine as high as $500, up to 93 days in jail, and up to 360 hours of community service. And as with any drink driving charges in Michigan, there is always the chance they’ll want to install an IID—or an Interlock Ignition Device—if they feel there’s a good chance you’ll do it again.

Now as we stated above, there are more extreme penalties in place if you are proven to be “super drunk”, even if it’s your first offense. If that’s the case, you’ll be up shit creek for a little while, but it will definitely be hard to not learn your lesson. First-time penalties for driving while “super drunk” include but aren’t limited to:

Keep in mind that the following penalties are only certainly in place if this is the second offense in seven years. Just like with the first offense, you may be dinged with one or more items off the following shit list if you’re convicted with a BAC of 0.08 or higher:

A second offense Super Drunk charge will almost indisputably carry all the same charges as being charged with a BAC below 0.17, but it is difficult to gauge where this will leave you personally as there is so much variance on a case-by-case basis. If you find yourself in this situation, the best thing you can do is immediately find a good lawyer—maybe here on BernieSez—who will be able to assess the unique nuances associated with your own offense. More often than not, that will allow you to plead guilty to a lesser charge and tailor the sorts of punishments a judge will sentence you with.

Here’s the game-changer. Anything beyond a second offense in Michigan is totaled over the course of your lifetime. In other words, if you’re charged a third time for operating while impaired, no matter when it happens, you may consider yourself formally screwed (and probably in need of clinical help) as this charge would qualify as a felony offense. A charge like this is attached to the following penalties:

It is always your decision—and your decision alone —hat will determine whether an experienced lawyer comes into play when defending yourself in a court of law. But seeing how the state of Michigan is armed to penalize you, it is well advised that you seek legal aid. Read on to discover a few details surrounding OWI case treatments that aren’t always so immediately apparent.

As in many other states, Michigan treats those accused of driving under the influence of drugs or alcohol as abiding by an Implied Consent law, meaning that there are certain penalties if you refuse a chemical test for any reason:

Whatever the case may be, you should be thoroughly prepared to deal with your decision’s ramifications moving forward. Just remember this: An officer might only think that you’re above the legal limit. If you agree to blow into the breathalyzer and you are in fact below the limit, he might just let you go.

Following your refusal, you’ll have the chance to request an administrative hearing, where the officer involved will have to prove certain things—basically, did he/she have a good reason to pull you over? Keep in mind that you only have 14 days to request this hearing. Because your initial refusal to comply is considered a civil infraction, you may immediately be expected to pay a basic fine of $150. And if you do not take any action after these two weeks, you will receive an automatic 6 points on your license and a 1-year suspension of your license. If your refusal to submit is the second within 7 years, your license could be suspended for 2 years. However, if you do arrive at your hearing with a lawyer who can effectively argue that your testing rights weren’t read to you properly, or that the arresting officer had no reasonable grounds to do so, you just might get off scot-free.

Within the Michigan OWI legal system, there is a charge that exists a step below an OWI that is worth understanding as you consider your defense options. An OWVI—or Operating While Visually Impaired—is exactly what the name suggests: that you were operating your vehicle in a physical and mental state that suggested you were obviously under the influence of something. Now the charges associated with being convicted of an OWVI are less than ordinary OWI charges, so it may benefit you in some cases to plead guilty to an OWVI in the event that you could potentially get strapped with more destructive penalties. For comparison, refer to the following list for the breakdown of OWVI penalties:

As any intelligent person might suspect, you can always face an OWVI charges at face value for the simple crime of appearing intoxicated behind the wheel and being reported to police by another ordinary citizen. That’s the thing about drunk driving; you’re a danger to other people, so you’re equally if not more likely to be reported by someone else than you are to be caught by an actual police officer. That means swerving or driving in any other conspicuous way; a BAC measurement is not actually required to be accused or convicted of an OWVI charge.

Hopefully, you’ve chosen to seek help before getting anywhere near a felony DUI conviction; rest assured that you’ve made a wise choice. Allowing the court system to strap you with any sort of drinking and driving charge without a fair trial can mean years or even decades of heartache. It’s important to weigh your legal options before simply giving yourself over to a public defender or worse yet, to a court without any legal representation at all. Often, when an arrest occurs there are many factors which can be analyzed in your favor in terms of whether or not your rights as a citizen have been upheld.

Even if you believe you may be 100% guilty, there are negotiations to be had—and you’ll want to be sure you have the most experienced person you can find on your side to help mitigate the eventual outcome.   No matter what events transpired before you got charged with drinking and driving in the state of Michigan, BernieSez is a great place to get some advice regarding your case or enlist the help of a licensed professional. Upload information pertaining to your charges to the site, and it will be viewable by local men and women of the law. Match with your lawyer today and get started on your path towards the better side of justice.