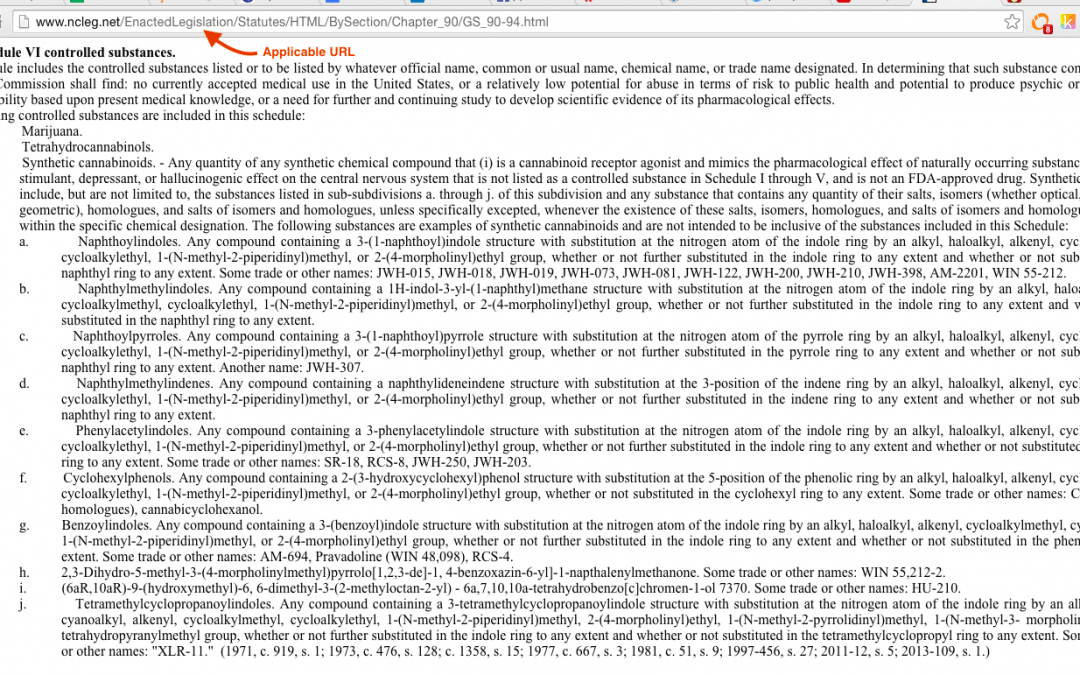 Below are excerpts of the NC General Statutes sections which pertain to Marijuana Charges in NC.  NCGS 90-94 is “Schedule VI”. It’s where NC’s legal definition of  marijuana is found. I have added some interpretive text (in italics and red color) to point out interesting parts of the law.

This schedule includes the controlled substances listed or to be listed by whatever official name, common or usual name, chemical name, or trade name designated. In determining that such substance comes within this schedule, the Commission shall find: no currently accepted medical use in the United States, or a relatively low potential for abuse in terms of risk to public health and potential to produce psychic or physiological dependence liability based upon present medical knowledge, or a need for further and continuing study to develop scientific evidence of its pharmacological effects.

The following controlled substances are included in this schedule:

What this means: Note that just by adding the plant name to the list of what is illegal, the statute implicitly allows prosecution of offenses involving common hemp which no one in his right mind would try and smoke to get high.

(3)        Synthetic cannabinoids. – Any quantity of any synthetic chemical compound that (i) is a cannabinoid receptor agonist and mimics the pharmacological effect of naturally occurring substances or (ii) has a stimulant, depressant, or hallucinogenic effect on the central nervous system that is not listed as a controlled substance in Schedule I through V, and is not an FDA-approved drug. Synthetic cannabinoids include, but are not limited to, the substances listed in sub-subdivisions a. through j. of this subdivision and any substance that contains any quantity of their salts, isomers (whether optical, positional, or geometric), homologues, and salts of isomers and homologues, unless specifically excepted, whenever the existence of these salts, isomers, homologues, and salts of isomers and homologues is possible within the specific chemical designation. The following substances are examples of synthetic cannabinoids and are not intended to be inclusive of the substances included in this Schedule:

Long list of chemical names follows. NOTE: These are examples only. Other drugs could be added to this list from time to time based on the chemical definitions set out in this section.

BTW: We built BernieSez.com to allow folks easy access to lawyers around the country. Just post your case and the lawyers call you with all kinds of advice.

Here you can create the content that will be used within the module.