Warning: Cannot modify header information - headers already sent by (output started at /home/customer/www/berniesez.com/public_html/wp-content/plugins/page-or-post-clone/page-or-post-clone.php:123) in /home/customer/www/berniesez.com/public_html/wp-content/plugins/wp-math-captcha/includes/class-cookie-session.php on line 46
 What to expect if you are caught drunk driving in Virginia - BernieSez

What to expect if you are caught drunk driving in Virginia 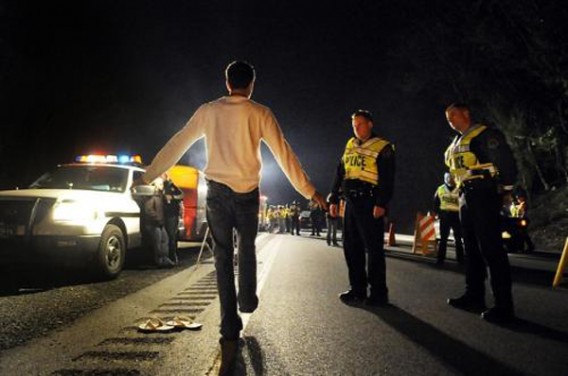 Virginia is one of a handful of states in our nation that encouraged the development of dry counties following the Prohibition Era. Even today, 10 out of the Commonwealth State’s 95 counties are dry, meaning that the sale of liquor is illegal in a retail setting, although beer and wine—and liquor in select cities within dry counties which have appealed to legalize it—are completely obtainable.

In spite of any hurdles one needs to surmount in order to get a stiff drink in Virginia, it’s common knowledge that the state can only do so much to prevent the individual from committing dumb crimes, i.e. drinking and driving.

Tip number one: Don’t do it! And if you or someone you care about, by some twist of fate, do do it, you need to know what to expect.

The state of Virginia has legal policies in place that extend beyond the cash register which are designed to reinforce the notion: If you’re handed a DUI charge, they definitely aren’t fucking around. Not convinced? Keep reading.

So what is illegal in Virginia?

To be charged with a DUI or a DWI in the state of Virginia suggests that you were operating a motor vehicle under the influence of drugs or alcohol to the extent that you or others might be in danger. While the best sort of legal defense would be to convince you not do it in the first place, the second would be to find a lawyer with a very firm grasp on the VA penalty system so that you might identify which consequences will hurt you most, and which will have the most impact on your reputation and your future alike. Without adequate legal representation, you could find yourself reeling in the horror show that is all of your potential consequences, including but not limited to jail time, losing your license and your vehicle, hikes in your insurance payments, and state-sponsored rehabilitation programs.

As seen in many other states’ operating-while-intoxicated systems, the threshold marking your entry from legal to shitshow varies depending on your age and your occupation. (And, of course, your criminal history, but we’ll get to that later. In the state of Virginia, you are breaking the law if:

You may read up on first-time offense consequences below, but keep in mind that your case will probably be treated differently if you’re found to have a BAC of 0.15% or higher, AKA if you are definitely pretty drunk. For example, an ordinary first-time offender will be facing no mandatory jail time, whereas someone with a much higher BAC will be looking at a jail sentence of 5 full days, minimum. If the BAC is 0.2% or higher, it’s at least 10 days of jail time. Other possible factors which would threaten your defense include having a minor in your car at the time of your arrest, or transporting an open container: Bad. Idea.

What’s gonna happen to me?

Even if you happen to be someone so fortunate to have never been in trouble with the law, you know that every legal scenario, and the possible outcomes a judge can deliver to suit a particular crime may vary on a case-by-case basis. That being said, the state of Virginia is pretty stringent when it comes to drinking and driving, and the maximum punishments available to you can appear horribly daunting. Well, you know what they say. Know your enemy.

This is considered a Class 1 misdemeanor. Upon arrest, you’ll be facing an automatic license suspension for one week while you and the feds figure things out. If you are convicted, a host of other things can follow. These things include:

Keep in mind that a misdemeanor conviction is “forever” within your criminal history, barring possible expungement later on. However in terms of your driving record and associated point accumulation, it will last 11 years.

Again, a Class 1 misdemeanor. While several of the maximum punishments set for first-time offenders are still in place here, the mandatory minimum sentencing areas are more extreme…as one might reasonably assume. Upon your second DUI conviction, you should expect the following:

All the same conditions surrounding your criminal and driving records are the same for a second offense. Also, to make things even more complicated, there is one more caveat associated with a second offense in five years: a mandatory minimum jail sentence of 20 days instead.

Now if you’re found during the proceedings of your second offense to have an unreasonably high BAC, your penalties are going to be unquestionably higher. If that’s the case (between .15 and .20%), you’ll face an additional mandatory 10 days in jail, or an additional 20 days if that BAC is over .20. There’s also a mandatory minimum fine of $500 if it’s over .15, period.

If you thought things were heating up before, think again. This is considered a Class 6 felony. Here’s what to expect if you somehow manage to drive under the influence three times in 10 years or less:

Although this is considered a felony, it will still be counted on your driving record for 11 years, but it cannot be expunged…because it’s a felony and you will be a convicted felon forevermore. Don’t let this be you!

Yes, this exists, and it is really, really bad. This is, surprisingly enough, also a felony conviction and is punishable by the following items:

Losing your license in this scenario is a pretty scary subject, and a little complicated as well. Upon your arrest, you would face immediate suspension, which would last until the day of your trial. Upon conviction, your license would definitely be revoked and you may not be allowed to drive in the state of Virginia ever again. Exceptions to this include: A) Application for restricted license after 3 years, and B) Petition for restoration of driving privileges after 5 years.

But wait—one important question remains unanswered: Can you really not drive upon having your license revoked, like at all? Luckily, the court can oftentimes be persuaded to show some leniency when it comes to getting around without a valid license. Given your compliance with an ASAP program and an IID, you may apply for a restricted license, which will allow you to commute to a limited number of locations, such as your place of work.

What if I just refuse the breath test?

While this is something you can do at the time of your arrest, it isn’t technically within your rights. Virginia operates under an “implied consent” statute, meaning that by operating a motor vehicle, you have already given law enforcement your consent to provide a chemical sample to gauge intoxication. One thing to keep in mind, however, is that there is a difference between a preliminary breath test—the one done by the side of the road to determine probable cause—and one conducted after the arrest. You may legally decline to submit to the former.

Overall, it isn’t a great idea to refuse a breath test after you’ve already been arrested. (Be aware, however, that an arresting officer in Virginia is not currently required by law to inform you of the drawbacks of such a refusal. They’ll just let you fucking do it.) The first time you refuse is considered a civil offense, meriting an automatic license suspension for one year—and that’s added on to any other penalties you manage to accrue. The second and third times you refuse a test would be considered misdemeanor offenses and punishable by 3-year license suspensions, each. Yeah…not looking so sneaky anymore, are ya?

Find a friend at BernieSez

Feeling overwhelmed? Maybe you just got dinged with your very first DUI charge in Virginia, and having read all this anxiety-inducing information, you have no idea where to start. And that’s OK!

Here at BernieSez, you have the opportunity to match with experienced lawyers across the country and find that perfect someone who will be able to help you reach that best possible outcome. Just upload your ticket and allow licensed professionals to peruse the details on your case; it’s free, and very well might provide that window of opportunity to lessen your charges. No matter what events transpired leading up to your arrest, BernieSez isn’t a place of judgment; it’s a place to learn from your mistakes, and benefit from the expertise of the best legal problem-solvers the internet can offer.